A downloadable cooking game for Windows

Manitas Kitchen it's a cooking game in which you play as Trexito, a tyrannosaurus with a dream to fulfill: make  P I Z Z A S,  but their short little hands are making it hard. 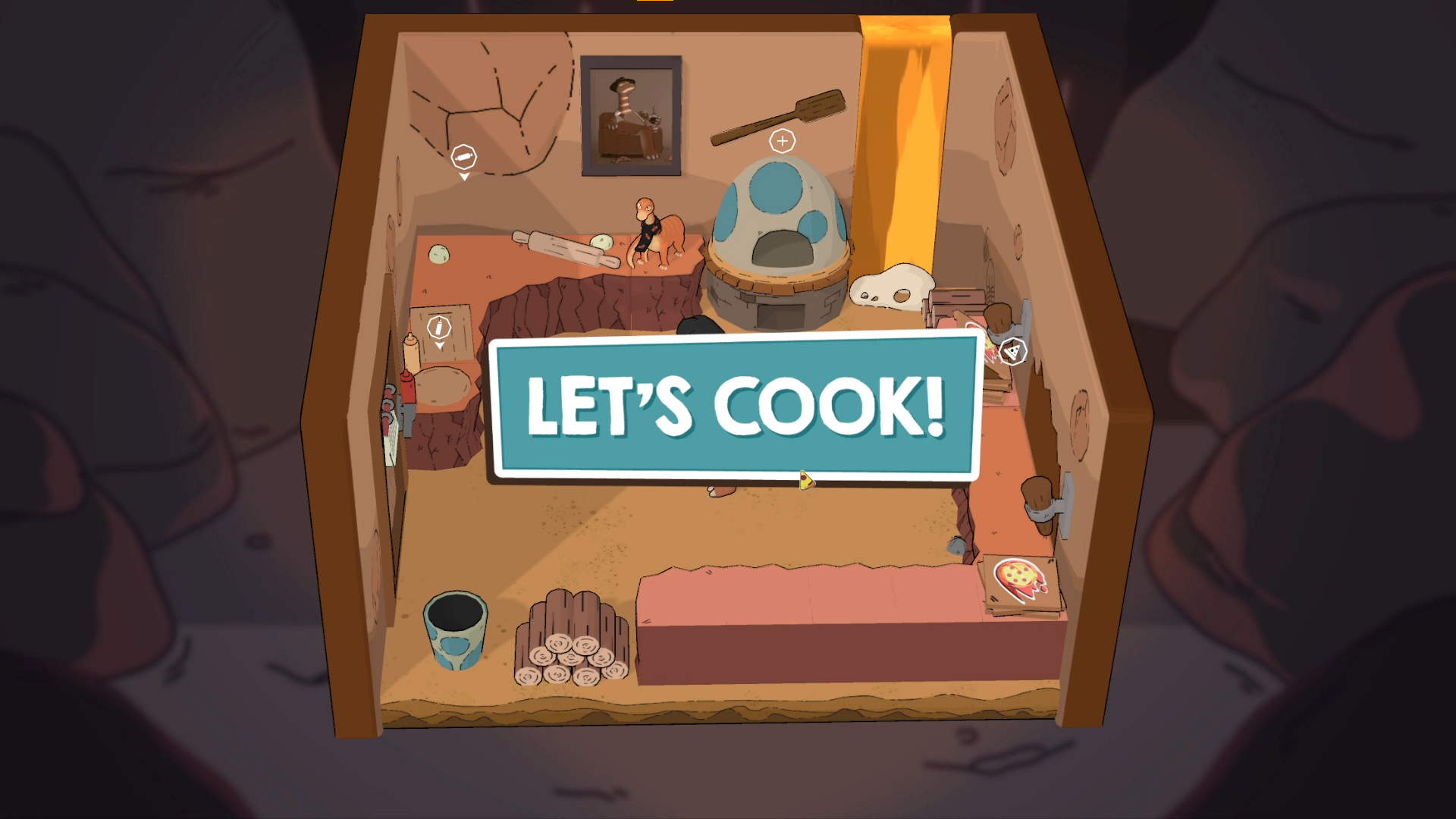 Bring together a group of dinosaurs with extraordinary skills to make up the best kitchen brigade the world has ever seen. All under the supervision of a very rude and very tiny boss.

What Trexito doesn't know, is that the kitchen where they work it's very suspiciously funded...

First of, please remember this is just a demo and we keep working on the game to bring the best experience with our Trexito.

At the beginning you will find yourself in the cave pizzeria where you'll be able to move around it. The game won't start until you open the pizzeria clicking on the button at the left of the screen. Each day before opening, you can buy some new ingredients at the shop, so your clients can order different pizzas!

After opening... help Trexito to make as many pizzas as possible!

Bear in mind that Trexito is already having a hard time cooking with their little hands, so be careful to not stress them or they will collapse. LITERALLY!!! The game will be over!

All your stress indicators are next to Trexito's icon at the top of the screen!

Every time you deliver a perfect order their stress level will lower, and if you are having an extremely hard time, just go to The Chair and sit for a bit!

If you are lucky maybe Alpadino, your big smol boss, will give you some help ;).

Also you will make us very happy

if you fill this ✨ survey ✨to let us know

about your experience :D

🍕 This game started with the help of Fem Power Up 🍕 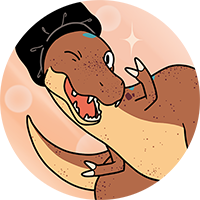 Please any bug or error that you may find, let us know. Your feedback is the best we have!

Heya! found a bug while playing! was carrying a pizza base to get sauce and managed to walk out the door and while trying to get back in i fell out of the world! made me laugh a bit though lol

Hello there! Thanks for the report and for explain it that well , this help us a lot.

and of course, thanks for playing!

My Let's Play from when I had first played is now uploaded :)

Thanks so much playing! We are actually working to make a better mechanic for the ingredients part, so thanks again for your comments and for playing our little demo!

Like others said, the mechanics need a little work. But the game concept is so cute, I love the art style and I think this has so much potential, can't wait to see how it improves ♥ Good luck!

Aww, thanks so much for the comment and playing! We'll continue to work on it and improve it thanks to your feedback ♡

Thank you for playing, we'll fix the issues!

Playing the Demo I'd have a few suggestions, and am gonna make a short gameplay video about it. I have feedback and suggestions/criticism for the demo, to me, was very frustrating and there's not enough information on how to make the very first pizza, not everyone is going to understand what the icons mean to make a Margarita pizza, that it doesn't tell you which sauce it uses, that 'slicing 2 ingredients' that, honestly, look like 2 balls of dough rather than Mozza balls, is gonna confuse a bunch of people I imagine and not just myself, the pizza itself looks nothing like the image on the Pizza order on the bottom of the screen so people will probably think "No, it can't be this". If you asked the player to make something common like a pepperoni pizza then people will always know 'cheese, tomato sauce and pepperoni slices'. I was wracking my brain trying to figure out what the game wanted from me since the ingredients looked like 2 dough balls being requested on the pizza. Mozzarella balls are for the most part, almost perfect spheres yet the ingredients look like Dough balls more than they look like mozza balls for the margarita recipe.

Secondly, the interface and control layout is, kind of inconsistent for no reason, for example. E and Q are the primary 'use/cancel' but, for the Sauce station, so you walk up to it, Hit E to begin selecting sauces, then W and S to go up and down the list (This is fine), but then E no longer is the Use/action key for no particular reason? Instead E is basically Page Up key? and the game wants you to select your sauce by hitting the Enter key and not the E key for what reason? Then hit Q to place the sauce on the pizza. Why the sauce minigame demands E, Enter then Q, when it could be E, E, E may seem like a strange complaint perhaps but the keys the game wants you to use at various times feels incredibly random for no reason when it could just be simple, consistent and effective.

I'd also say the Ingredient placing minigame is an odd choice, if you have all the ingredients and need to make a recipe that calls for, lets say, Mushroom, Bacon and Peppers as just an example, then the minigame involves all of the ingredients in your position flying pretty fast towards the cutting board, even the ingredients that you don't want in your pizza? The game is rushing you because Time is of the essence AND stress build-up but its also wasting your time by throwing RNG elements into throwing ingredients not desired into the minigame to waste your time until the randomly-needed ingredients show up? You're waiting for the game to give you your own ingredients by Randomized Elements, feels.... very out of place? Maybe intentional to 'add stress' but, I personally don't think its a good fit.

Otherwise, the T-rex is cute, the theme is cute, the characters are cute, the concept is cute, I'd be happy to see this succeed, it just needs to be more consistent, efficient and to remove the frustrating elements so that there's less chances for the players to get irritated by not knowing what to do at first. Margarita is a strange first choice for the beginner pizza, but, even then its a pizza that uses bazil, olive oil and salt as well as the tomato sauce and mozza balls so its not even a legit margarita pizza at that, its just kinda odd. Tomato sauce and 2 slices mozza balls is more akin to a 'Tomato sauce pizza with minimal cheese' than a Margarita pizza.

Hope this doesn't bum you out or sound too negative, hope the game improves and does better as time moves on.

Hey there! Thanks so much for taking your time and write this comment, we really appreciate all your feedback.

You are totally right, we've been moving around this demo a little and everyone found hard all this points you are commenting here, so we are now working to fix all of them! It's easy for us to miss all this things as we are too used to see them while developing, so thank you for the helpful tips and don't hesistate to keep the criticisim going, it's only going to make the game better and that's all we want.

Thanks for the response, and its not a problem. I hope it can help and that such feedback isn't any kind of downer, I'd only give feedback cause I care enough to suggest/give feedback, and will hope it leads to positive growth for you and your team :) Best of luck.

It's very nice and has potential! Got lost a few times but wasn't too bad even with not knowing how to put toppings onto the pizza.

Thanks for playing!!
Yeah, we are now working on making it to be more understandable and fun! 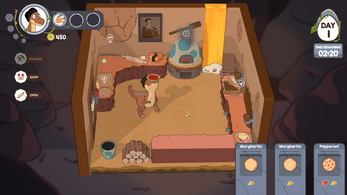 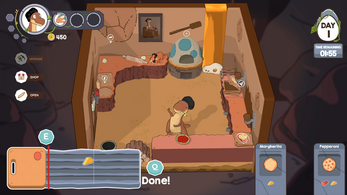